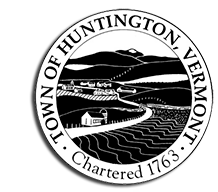 Located approximately 25 miles south of Burlington, Vermont’s largest city. According to the 2010 Census, it has a population of 1939.

Geographically, Huntington is a beautiful mountainous town, with many streams and rivers, the largest being the Huntington River. Huntington is the home of Camels Hump, the third highest mountain peak in Vermont, a favorite hiking spot for many. From the top of the Hump is a breathtaking view of the Champlain Valley, and on a clear day, you can see as far as Montreal. The Long Trail runs through Huntington and across the peaks of Camels Hump and another prominent peak, North Mountain.

Huntington, a post township in the southeast corner of Chittenden County, was chartered by Governor Wentworth to Edward Burling and others, in the name of New Huntington in June of 1763. New Huntington stretched from Starksboro and Buel’s Gore north to the Winooski River (at that time called the Onion River) near the Round Church. Subsequently, portions of the New Huntington township were parceled out to Richmond and Bolton by an act of the Vermont Legislature in 1794. As the boundary limits of the Town were materially changed, the original name of New Huntington was not thought to be proper, so in 1795 the name was accordingly altered to Huntington, by additional act of the Vermont Legislature.

The Town was organized at a meeting held at the home of Ozem Brewster (now the Towers Farm in Richmond). Charles Brewster was chosen as Town Clerk, Amos Brewster Jr. was chosen Constable, and Ebenezer Ambler, Ozem Brewster and Parley Starr were the first Selectmen. Jehiel Johns was the first Huntington Justice of the Peace and held that office until 1796. He was also the first representative for the Town of Huntington in the Vermont Legislature.

Huntington’s first Post Office was opened in the North Village (now the Lower Village) near the commencement of the 19th Century, and then closed for non payment of expenses. It re-opened in the South Village (Huntington Center) in 1828.